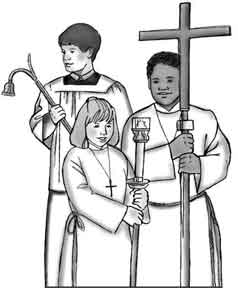 Altar Service is done by a well trained team in this mass centre.Their role is very important as he/she is one of the closest persons to the Altar and to the priest representing Jesus Christ during the celebration of the Holy Mass and the administration of Sacraments. Being a server means serving God and his people at the Holy Mass.  This mass Centre is blessed with a group of men and young boys who have taken it as a privilege to serve at the Altar.

In the early years it was Mr.Saji Uthuppu and Mr.Shino Lukose who were leading the service. From 2009 onwards Mr.Johnson Neelamkavil became the leader. Chaplain Rev. Fr. Innocent Puthentharayil took a lot of effort in shaping up a proper altar service team and introduced transliterate mass books to ensure the participation of children. And a group of dedicated boys learned the book and started participating actively.

From 2011, under the leadership of Mr. Jathin Thomas, Altar service developed to a great standard. This group of boys have been willingly serving the parish community over the last so many years. Every new member and also existing members get training at regular intervals from the priest and also from the team leader. Formerly only men and boys could serve, but from 2014 girl members are also permitted in the team